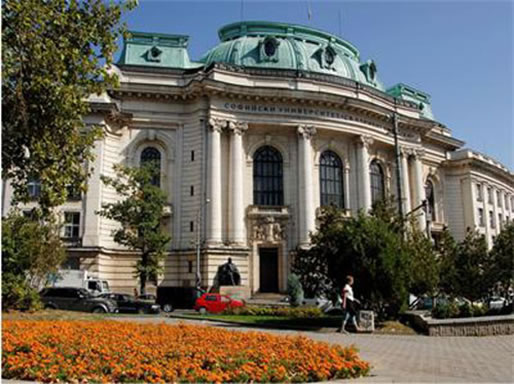 Sofia University St. Kliment Ohridski is the first Bulgarian high academic school establishment. Its history is an embodiment and a continuation of the centurylong cultural and educational tradition of the Bulgarian nation.

In 1880 the Bulgarian Ministry of Education tabled a draft of the Main Educational Act for the Schools in the Principality of Bulgaria in the National Assembly. It envisaged that “after completing the requirements of the Real and Classical schools to open a Bulgarian high school (a University) that will teach the sciences of law, the arts, the sciences, the medical sciences, and the technological sciences.” In 1887, T. Ivanchev, minister of education, issued an Ordinance for the Opening of a Pedagogy Class Affiliated to the First Male Gymnasium in Sofia. The classes began on 1st. Oct., 1888. On 8th, Dec., 1888 the National Assembly passed an act transforming the latter into a High School; the act was promulgated on 1st,Jan., 1889 with Decree No. 159 published in the Government Gazette. Alexander Teodorov-Balan was elected its first Rector. In the provisional Statute adopted the establishment of a history-philological department was the only one envisaged. During the 1889/1890 academic year the physics-mathematical department was opened, and in 1892 the Faculty of Law was inaugurated.

In 1894 a new High School Act was passed and with a decree it was transformed officially into Brothers Evlogiy and Hristo Georgievs from Karlovo Bulgarian University housing three faculties: history-philological, physics and mathematics, and law. From 1918 to 1923 four new faculties were opened: the Faculty of Medicine, the Faculty of Agronomy and Forestry, the Faculty of Theology, The Faculty of Veterinary Medicine. In 1938 Sofia University boasts of 7 faculties, 72 institutes, clinics, seminars, a substantial library fund and its own scientific journal. Sofia University St. Kliment Ohridski established itself as one of the most prestigious scientific centers on the Balkans.

From 1947 to 1952 the National Assembly passed a series of acts which took out faculties and institutes from the structure of the University. Some of them laid the foundations of newly established high academic institutions such as the High Institute of Economics, the Academy of Medicine, the Institute of Veterinary Medicine, the Academy of Agricultural Sciences, still some others are integrated in the structure of the Bulgarian Academy of Sciences. In the recent years some of these units were reincorporated back into the framework of the University (the Faculty of Theology, the Faculty of Medicine). A new Faculty of Economics and Business Administration was founded. In 2012 the Faculty of Chemistry was transformed into a Faculty of Chemistry and Pharmacy.

In 1900 the Statute of the Library at the High School was adopted. In 1905 the Annual of Sofia University started being published with an official and a scientific part; it included legal acts, bylaws, timetables of lectures and scientific publications by University lecturers. The University Library St. Kliment Ohridski is the first academic and the biggest science library in Bulgaria. In 1925, with the adoption of the Deposit Act it became the third library in the country to receive a free of charge copy of every publication made in the country.

Nowadays the University Library possesses a rich multidisciplinary fund that numbers more than 2 510 000 library entries including both scientific literature and study manuals, some rare and valuable publications, well stocked periodicals, e-publications, etc. The incunabula collection is impressively rich, including some very rare and unique publications. Annually more than 20 000 library units are added and more than 30 000 readers avail themselves of its services accessing to more than 340 000 library materials. It offers services using both traditional and modern technologies that create its image as an up-to-date library center of information and education. Its mission is to provide the optimal information access to all its readers, creatively participate in the development of Sofia University and build up information competence in its many users.

Since the beginning of 1935 Sofia University has officially carried the name of its patron. In 1968, when the Bulgarian Orthodox Church returned to the old style of the Julian calendar and the feast of St. Kliment Ohridski went back again to 25th November, and since the 90ies of the XXieth c. it has been the patron feast of Sofia University only. 8th of December has remained a secular date and keeps on being the Day of Bulgarian University Students, one of the most popular holidays in this country. The faculty and student body at Sofia University St. Kliment Ohridski celebrate both academic holidays, the patron and the nation-wide one, both being of common origin.

Sofia University St. Kliment Ohridski is an educational institution that has stepped on the road of the development of research. The principle that the top level is a conditio sine qua non is mandatory in the implementation of the effective interaction between the educational process and the technological development, science and innovative politics. Sofia University has the best Bulgarian scholars in all fields of scientific research. The scientific activities of the faculty at Sofia University St. Kliment Ohridski has become an obligatory part and parcel of the teaching process.

The scientific activities of Sofia University St. Kliment Ohridski have been developing in compliance with the accredited by the academic community Strategy for the Development of Scientific Research (2009-2014). It defines the priority research domains and, at the same time, adheres to the tradition of Sofia University to safeguard the freedom of the lecturers of their choice of concrete research objectives. The strategy of scientific research at Sofia University St. Kliment Ohridski aims at creating conditions for the sustainable development of a university science potential that will guarantee its successful participation on the market of scientific products. It also sketches out the long-term plan for systematic activities that will provide a solution of the pressing need for radical social reforms. The scientific research strategy asserts project funding as the main tool of financing scientific and research work. Today Sofia University focusses on projects funded by national and European programs, ministries, national agencies, NGOs, and business enterprises. The mission of Sofia University is to develop the scientific, educational and cultural potential of Bulgaria, whereby the new emphasis is on creating models for social development both by revealing the intrinsic ability of institutional change and the social results of such a change: this comes as a new level of scholarly production, of social outcome, and of social expertise. The implementation of such a mission is in direct relationship with the reaching of the strategic aim of the scientific development of Sofia University.

The edifice of Sofia University St. KLiment Ohridski was built with the financial aid of two donors – the brothers Evlogiy and Hristo Georgievs and is one of the architectural landmarks of the city of Sofia. Today it covers a built-up area of 36 000 sq. m., with 324 premises, 65 of them being lecture theaters with 6 000 seats.

As a separate part of the global strategy of the University are its international activities. It is through the latter that many such a scientific activity is stimulated and the teaching process is facilitated. The University maintains interuniversity agreements with more than 80 universities from various countries, hundreds of joint participations in international projects of different types and multilateral contacts with scholars from all over the world.

Sofia University is the leader in the country in terms of the number of participants in the students’ and lecturers’ mobility and the implementation of the idea of European space in the domain of university education.

With the signing of the Erasmus Сharter in 2007 and Bulgaria being a full-fledged member-state of the EU the University continues its active participation in the implementation of the updated with new educational possibilities Learning for Life European program.